Wedding season is in full swing, which means we’re traveling throughout Wine Country playing ceremonies, cocktail hours, and beyond! Yesterday we got to take part in Nathan and Shannon’s special day at Barndiva in Healdsburg, CA. The weather was perfect and everyone looked stunning!

In addition to some standard wedding repertoire, we threw in some of our jazz and pop favorites by The Beatles, James Brown, Ella Fitzgerald, Taylor Swift, Etta James, and Lady Gaga.

Congratulations Nathan and Shannon! We had a blast. Thanks for having us on your special day!

When did it all start? I began playing cello when I was 13 years old. I played violin for two months before beginning cello, but begged my mother to let me switch after sitting in orchestra and noticing how much fun the cello section was having… she eventually caved and I haven’t looked back!

What did you study in college? I attended the University of Washington for my undergraduate degrees, where I majored in Music as well as Microbiology. After graduation, I worked as a veterinary technician, and quickly came to realize my need to be a cellist (not a vet…), and came to the Bay Area for my masters degree at the San Francisco Conservatory of Music, where I studied with Jennifer Culp.

How do you feel about time travel? It has always been a fantasy of mine. I am deeply fascinated with American life during the late eighteen hundreds through the turn of the century. True exploration still existed in the late nineteenth century. Then, with the turn of the century, civilization witnessed a massive shift in culture, from cowboys and outlaws to oil rigs, production lines, and the beginning of our modern world.

Proudest Musical Moment? While at SFCM, I was fortunate to perform Bach’s Cello Suite No. 6 on a five string baroque cello. That suite is by far my favorite, but also one of the most difficult pieces written for cello. I was proud to finally be able to perform it on the type of instrument it was written for.

Greatest influence: Yo-Yo Ma was the first cellist I ever heard on the recording he did with Bobby McFerrin, and that basically inspired me to play cello. He is hard to beat; his ability to create true music in so many genres is astounding and nearly unparalleled.

If you were an animal…
I would be an osprey. I love the way they float over the ocean, and dive into the water at near terminal velocity when they spot their unwitting prey.

Guilty pleasure pop song? I try not to feel guilty about liking any kind of music… One pop song I have been loving lately is Sail by AWOL Nation. I love the simple groove, and the lyrics really speak to me. Also, I don’t know if this qualifies as pop music, but D’Angelo’s new album Black Messiah is amazing. Funky, but still true to his smooth sound, this album is one of the best I’ve heard lately.

Anything else? I’m a member of Wild Rumpus, a contemporary ensemble dedicated to performing and commissioning new music by emerging artists. I have been in the group since 2012, and it has been exciting to see our group grow and thrive. 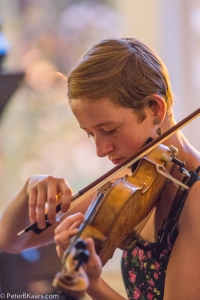 How long have you been playing your instrument?
Since I was 3, which is longer than I can remember.
Where did you attend school?
Mills College.
If you could time travel, what year would you hang out in?
3015.  Might as well see what the distant future is like!
Proudest musical moment?
Performing the 1st movement of a Mozart concerto (G major) with the Paradise Symphony Orchestra when I was 11;  I looked out before my cadenza and saw people I love in the front, smiling.  Plus I made it to the end for a standing ovation.
Greatest influence(s) musically?
Michael Rabin, Sammy Davis Jr., Greg and Barbara D’Augelli (my parents and fellow musicians), and there’s always a spot in my heart for big bands and intense lyrics (think Andrew Jackson Jihad).
If you were an animal, what would you be?
A monkey.
Guilty pleasure pop song?
“Fancy” by Iggy Azalea (but I actually know the lyrics to Weird Al’s version).

Other groups you’re involved with?
The Town Quartet, Ensemble Mik Nawooj, and more depending on the day.